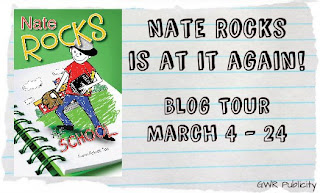 So, who attended the Twitter party on March 4th? I wasn't able to be attentive as I would have liked since we are on vacation but I did enjoy myself, and even learned a few things.


Nate is at it again in the third Nate Rocks book, Nate Rocks the School. 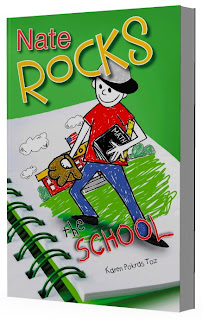 According to Nathan Rockledge, fifth grade has plenty of perks. Oh sure, there’s more work and that know-it-all, Lisa Crane, is still around – but, there’s a lot to look forward to as well: a laser tag birthday party, baseball at recess, and even a cool Halloween dance. Of course, all of that means nothing without the biggest perk of all . . . the class trip to New York City in the spring. If Nathan’s class can raise enough money to go, that is.

Give Nathan paper and a pencil and watch as his imagination turns him into Nate Rocks, hero and fifth grade super star. With adventures abound, Nate saves the day time and again. But will Nate be able to save the fifth grade trip?

Join Nathan, his hilarious family, and his friends, as he rocks the school in another fun Nate Rocks adventure. 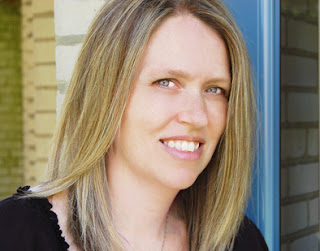 Karen Pokras Toz lives outside of Philadelphia with her husband and three children. Karen’s middle grade childrens’ novels: Millicent Marie Is Not My Name and the Nate Rocks series, have won several awards including First Place for Children’s Chapter Books and the Grand Prize Overall in the 2012 Purple Dragonfly Book Awards, as well as placing first for a Global E-Book Award for Pre-Teen Literature. Karen is a member of the Society of Children’s Book Writers & Illustrators (SCBWI). Her first adult contemporary novel, Invisible, will be released this summer. For more information, please visit www.karentoz.com. 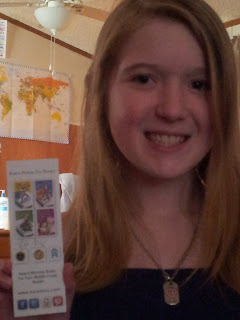 If you follow our facebook page you may have seen a post I shared from Karen recently. See, I am part of Karen's Street Team and occasionally Karen gives us some pretty awesome swag. Since Poppy has been reading Nate Rocks as well, she has been helping me with my reviews by doing book reports on the books (two birds - one stone!). When Karen sent out the latest round of swag she sent an autographed bookmark. Since Poppy did so well on her last book report of Nate Rocks the World I gave her the bookmark! She quickly went in search of a place to put it up so it wouldn't be destroyed, but not before I was able to snap this picture and send it to Karen. You can see more pictures of other great kids reading Nate Rocks here. Poppy was pretty excited to see that she had made it to Karen's website!


Well not only is Nate at it again, so is Karen! I've sat thinking, "Which Nate Rocks book is my favorite?" I've found that it a hard question to answer. Karen is so creative and there are so many great highlights in each book. I would have to say without a doubt that the babysitting scene is by far my favorite in Nate Rocks the School! I spent a lot of time babysitting when I was a teen. One family in particular, a family friend, had 3 kids - 2 girls and a boy. They definitely kept me on my toes at all time, and could so have seen the little boy escaping a climbing a tree.Thankfully though he never did!

Nate is in 5th grade - his last year before moving up to middle school. He is finally and the top of the ladder - the big kid in the school, AND they long awaited class trip to New York City! This year couldn't be better. But wait, everything is not set in stone and there may not be a trip to NYC! WHAT? How can that be possible? Everyone has always gone in 5th grade. Plus all the parents signed the permission slip and paid the deposit so it is a go - RIGHT? With the Halloween Party (the BIG fundraiser for the 5th grade trip) being a bust due to Nate's Mom and her awful cooking, Nate and his friends must find a way to raise enough money before the school has to cancel the trip. If Nate didn't have bad luck sometimes he'd never have any luck. With Tommy's big mouth and Nate's outburst in class, they are now stuck working with Lisa Crane to find a way to raise enough money and before Christmas Break.

As with anything involving Lisa, there are lots of arguments on who has the better fundraising idea - Lisa or Nate. Lisa wants to make custom Christmas ornaments. Nate wants to do a car wash. Either way it is November, and it's not exactly car washing weather and there is not nearly enough time to take orders and make custom ornaments.

After another failed attempt for fundraising with the car wash the kids finally decide to hold an auction. They visit all the stores in the mall, passing out flyers asking the stores to make donations to be auctioned off. Nate gets super exited when there is a Phillie's jersey donated. His Mom promises she will bid on it for him, but once it is up for auction she doesn't even bid once. Nate is super disappointed, but not for long! Will they earn enough for their trip to New York City? What about the jersey Nate wanted SO bad? Well, you'll have to scroll down and buy Nate Rocks the School now so you can read it and find out! Hurry! What are you waiting for?

The Nate Rocks series is recommended for children 7-11 years old. If you have an younger advanced reader that is ready to move beyond the simple 2-4 page chapter books then give Nate Rocks a swing! Nate Rocks is not a BOYS book, girls will enjoy Nate Rocks as well. However, if you are looking for a good book for the little girl in your life, I heard from a little birdie that Millicent Marie is Not My Name is pretty darn good!

March 15 Yours and Mine ARE Ours http://www.yoursandmineareours.blogspot.com Review, Character Guest Post, and Giveaway Contact Me! You can email me at mariettahomeschoolingzoo@gmail.com or fill out the form below.